The two policemen search my flat, room by room. Not really looking, but more of an ‘I can’t be bothered’ glance into each.  Sometimes, it helps to be classed as some kind of scum to them; they don’t really care about anything as long as it doesn’t cause them too much trouble. I wonder if I come under that label too. 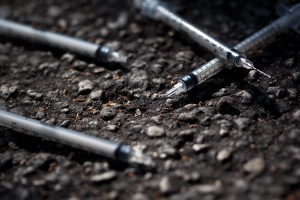 I feel my chest tighten as they reach my lounge and then my bedroom. The stairs are next, shielded at the moment by a door  a door that   feels like it is waving  and flagging  them down to say,  look in here.

I hold Colin’s hand, not for his comfort, but for mine; something to do with my hands and a reason not to pull my own hair out with despair as I watch. It’s like slow motion. I hold my breath on instinct, waiting for the bang in the situation; the sound of my life exploding.

My front door opens again and I turn to see from my position in the hallway. My anxiety spikes with the chaotic invasion of so many people all at once. My head feels like it wants to implode; the fragments of my skull crushing my brain and making my thoughts swim.

I fight the urge to follow the police. The nervousness inside threatens to make me shake on the outside, too.  I am stuck between wanting to get the police out and wanting to go to Joanne, my girlfriend, as she enters the flat.

“What’s going on?” she asks and I tell her they are looking for Mark.

“Have you seen him?” I shake my head.

Phil comes in behind Joanne. I don’t notice him at first; not really a friend, but an enemy I keep close and one  that I let use me on occasion when  I can  benefit . A strange friendship with a mutual lack of trust. He isn’t so bad, but I know that if the need came up, he’d bail on his friends and save himself. His girlfriend, Becci, is with him. I nod hello to them and turn myself back to the police, remembering my anxiety.

“What’s up here?” One of them asks as he opens the door to the attic stairs.

He flicks the light switch; the bulb hums, blinks twice, and comes on.

Colin moves forward as the officer climbs the stairs. He doesn’t go all the way up but just enough to see into the attic.

I let my breath out as the officer comes back down and turns the light off, but my anxious mind wonders why Mark wasn’t seen. In my head, I see the layout of the room; the piles of boxes still unpacked and dumped in complete disarray where they were out of sight.

The police are leaving but before they make their descent of the steps that lead into the alley way, one turns.

He asks me to contact them if I see Mark. I nod my head, take their card and give my fake promise.

Back inside, I lock the door.

It’s a moment before anyone moves. Even the police take what feels like hours to start their engine and drive away, but they take my apprehension with them and I go to the attic myself and make my way up the stairs.

Colin comes with me and we stand side by side scanning the room. I can’t see Mark, either.

A panel in the wall moves and Mark crawls out and dusts himself off. It is like something out of an old English horror film and all that’s missing are the books and candlelight.

“I pushed it and it moved,” he said, as if it was enough explanation.

I am only a tick away from going down myself, as I walk the tightrope of the law, and.. I don’t want to tip it and fall off. I think about Will, my son. I know the limits I can push.

“I’ve got a job for you,” he tells me, and my mind clicks to wondering why he is offering a good deed. Never would he do something through kindness.

Mark says goodbye and I feel Colin’s despair; deeper each time Mark leaves.  So young to be left in the world by himself and in those moments, I wish I could make it better for him. I know what it’s like to be alone at his age. He is a child lost in an adult world, too small to matter, too quiet to be heard, and too young for anyone to care.

Will comes home not long after and I tell him and Colin that its bath and bed time. Colin protests, of course. Sometimes, he forgets his age, but he’s in bed and asleep before Phil gets back.

My head is getting tired. I can feel it is too heavy and I really just can’t be bothered. Some days, I wish it was possible for me to close my eyes and not open them again. There isn’t much joy in my world other than my son, and more often than not, I am sure that he would be better without me in his life. Only fear that my father would get his hands on Will, keeps me alive.

My body wants to rest. The artificial energy is going fast, and I just want a few more hours of that feeling. The high is where my life feels good. Just a little while longer. It isn’t much to ask. I can sleep tomorrow when the sun comes up, and face my demons in the light.

Phil has come back, but I need to clear my mind. The sadness is building in my chest like an unwelcome visitor; so thick, I can reach inside and touch it.

I tell Joanne, Phil, and Becci that I’m going to get a shower. I won’t be long, I don’t feel good. It isn’t a lie, but I don’t tell them what’s in my pocket.

My envelope of clean needles is stuffed behind the water tank. I light a cigarette and pull them out. Joanne knows they are there but I don’t want Will or Colin getting hold of them.

Mixing my phet is easy enough. I could probably do it with my eyes closed. I finish making my hit and smoking my cigarette at the same time.

The raised bump in the crook of my arm calls out like a hungry bird. I’ve used it so many times that I don’t have to force the vein into place.

The others are chatting away in the lounge. I don’t fit in with them. Their words annoy me. I developed a clever act over time to pretend to be like a normal person, but sometimes, I wonder why I try at all.

I let out a tired sigh as I push the needle in my arm and inject the solution. I close my eyes for a few seconds and when I open them again, I someone else. A whole new person with life inside. A resurrection of who I was meant to be.

I get into the shower and stand, letting the water beat down on my back. The adrenaline from my hit runs up my spine like bubbles with spider legs that carry everything I need to feel great. I breathe fast with it, letting it ride over me and inside as it clears away all the darkness. My mind awakens and every part of my body becomes alive, again.

I wash, dress, clear away my things, and light another cigarette. I am a new person. I scoff at who I was just moments before. Pathetic and broken. A loser.

“Better?” Joanne asks when I enter the lounge.

She’s sat on the floor, with Phil on the sofa and Becci on the floor between his legs. I tell her yes and throw her the foil with what’s left of my phet.

“Excellent,” she grins, and unwraps the foil. She doesn’t take it the same as me. Instead, she wraps it in a cigarette paper and swallows it like a pill.

“Maybe not,” says Phil. “I’ve got something I need you to do. A thousand pounds,” he says. “We can split it fifty-fifty.”

A thousand pounds. My mind clicks. It’s a huge amount. I have never had that much before. I weigh up how much phet I can buy verses the food I could put in the cupboard. I could feed the boys.

“There is a new television,” Phil explains to me. “Two grand, it’s worth.”

My heart sinks at his words.

“I can’t break in somewhere. I can’t risk getting caught.”

“You said no more,” says Becci to Phil, and before she has a chance to say anything else, Phil kicks his foot out and catches her jaw.

“Not here,” he tells her, like a disobedient child.

She doesn’t hide her tears as she clutches her mouth, but neither Joanne nor myself do anything about it. I feel a pang of guilt at the edge of my mind as I do nothing.

“Broke her jaw the last time I did that,” Phil laughs. “Didn’t I love?”

Becci nods but doesn’t say anything. She’s fine and we carry on.

“A television,” he continues. “I’ll give you the paperwork and all you have to do is pretend to be someone else, and play the part. Take it out on credit.”

”Simple, right? They don’t even check this shit. Just go in and ask for a television, and they help you out to the car with it. Easy. My uncle wants it; he’s giving me the paperwork. He’ll give us a grand for it.”

Five days. Five days with no phet and no food. A lifetime away, but what else do I have?

5 thoughts on “Back Alley Kid Three”