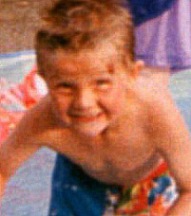 Today I sent off a picture of the child I was to someone who is doing a collage of survivors. I didn’t think so much of it until I was staring at his face. Looking at the bruise on his forehead. Looking at the smile on his face that hid the horrors he had endured the night before.

My therapist used to tell me often to take out a picture of myself when I was a child and to really look at the face and the innocence that’s there. I never really did it. I didn’t see the point. I didn’t believe what she was telling me.  She wanted me to look at him with my eyes and not my parents.

I couldn’t do it.

I hate that child. I agree with what he endured. I wish I could go back in time and push him down the stairs and tell him how much I hate him. Because I do. Some days I hate him so bad that I wish I could reach in and rip him out and throw him away.

I see him through my parent’s eyes. I see that he is unworthy. That he caused his parents to do the things they did to him. That he didn’t fit and wasn’t good enough to be part of anything, including his family. I don’t even see him as a child. I’d never hurt a real child, I’d never hate one, but him, I loathe.

He made his parents that way. They were not abusers until he came into their lives. It was his fault that they did things people would think as awful. Yet they were not awful people. They were good; they just got landed with a child that made them do bad things.

Today I looked at his face and saw him with my eyes.

It was one of the hardest things I have done.

20 thoughts on “Not Through My Eyes.”