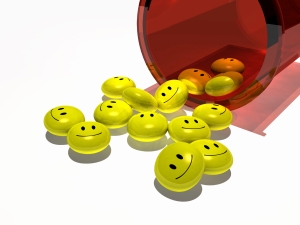 So I did it. I took the plunge and tried medication … I never thought I’d say that. If you know me and have read my books, then you know that taking any form of medication was off my list. I refused Decided that I could deal with my mind and I’d get through it.

I’ve been on a downward spiral for a while now. A good few years I just couldn’t get off the damn slide and I was slipping farther and farther down it. It’s been really coming to a head these last few months. Over Christmas time I struggled so hard just to get myself out of bed and I’d have these arguments with myself almost. Like why was I feeling this way? But no matter what I did I couldn’t shake it. My self-harm has been so bad. I’ve had so many stitches. I’ve landed myself at the hospital. It’s just been a total nightmare with this monster in my head.

I’ve been on my medication for four weeks now. I started at a lower dose and then my doctor doubled it, mostly because I was afraid of taking this leap, but my god. I know these meds take 2-3 months to work, but I already see the benefit from it. I’ve not self-harmed in four weeks. Four Weeks!!! That deserves those exclamation marks, because before I started, I would be lucky to say four hours.

I’m not saying the medication has fixed me, or cured me, but it’s certainly had a great effect on me and my mood. I’m still struggling with my anxiety. That’s increased a little bit. It’s such a strange thing. My anxiety has increased, but I can cope with it better. Rather than having a full blown out episode, I can stop and say to myself, okay. This is my anxiety. Let’s deal with it.

I have some side effects too, but nothing I would say are overly adverse. I’m grinding my teeth to the point that my jaw aches and I have to stop it. Sometimes I feel a little spaced out, so I take my medication before bed and seem to sleep that off. I can’t multitask like I used to. My mind seems to want to focus on one thing and if I try to add more, then it has a freeze up. Not really a bad thing I guess. Multitasking is bad for you anyway. I have to most weird vivid dreams. They feel so real. Sometimes they’re horrible, actually more often than not they’re horrible, but I am sleeping. I sleep all night I also find that I need to get the full eight hours now. If I don’t I get sluggish the next day. Also not really a bad thing. But so far so good. I can’t really say they’re major bad things really. Just things that I notice.

I feel a lot of anger recently, though. I’m not actually sure if that is my medication, or that is stuff that I’ve held inside for so long coming out.

My father has had a do not resuscitate order placed upon him. He wanted me to take it off. He was quite upset about it. But he isn’t of sound mind. He was upset because he believes himself to be going to work every day, and he isn’t. he can’t even get to the bathroom now. It was very hard for me to fight this because I felt like I was holding his life in my hands. And ironic all at the same time, that I am the one with these choices. I am the one who suddenly has come control on my father’s life and he has to trust that I will do what’s best for him and that I’ll care for him.

It creates a lot of anger for me I’m losing my dad and I’m fighting with my emotions inside. The part of me that is his child wants to grieve at the coming loss and the part of me that is so angry at the things he has done, doesn’t understand why I am upset. It’s almost like I can’t comprehend that I am upset about him. And all these years, all the family has ever seen is that we’ve been at war with each other He’s seemed to hate me all my life and I’ve done so well to wear a mask that shows it doesn’t hurt me, that I don’t know how to take that mask off now in front of my family and show that I am upset. Somehow even the right to be upset has been taken from me and if I try to take it back, I feel like a fraud.

8 thoughts on “The Plunge and Life”